The initial two days in Indonesia weren’t anything particularly exciting. I had read in the guide books that if you fly into Jakarta, you should just get out right away. We found a bus straight from the airport to a nearby town called Bandung. This place was nice enough, but I think we were itching to get to the beach. Over the next two and a half weeks, we spent time relaxing by the beach, adventuring, swimming, climbing volcanos, and soaking in the culture. I have specific posts dedicated to the adventuring, beaching, and trekking, but I’ll discuss some of the things that stuck out to me culturally in Indonesia here.

Indonesia is famous for its handcrafted puppets and batik paintings. On my Green Valley/Green Canyon tour, I was lucky enough to watch a puppet being made. The puppet maker even put on a little show for us. It was so unexpected and a very unique experience. We were also pulled into many different batik painting shops. This could be quite a hassle at times, because the sales people were very pushy. I thought they were so beautiful and probably would have bought one had I not felt that the sales people were too pushy. It might be a regret that lingers, not having bought one of them. 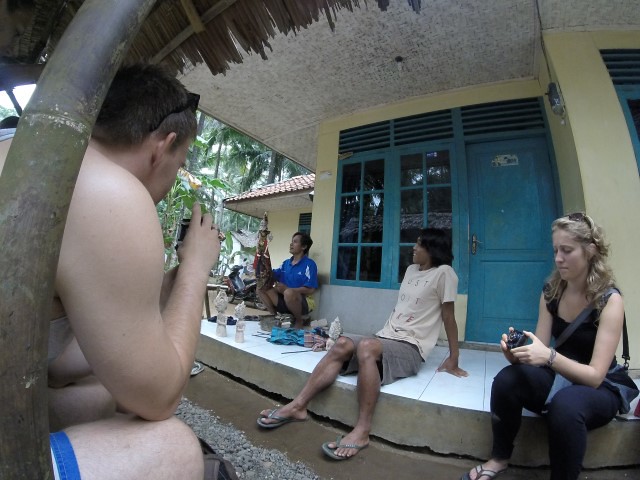 The Locals and the Food 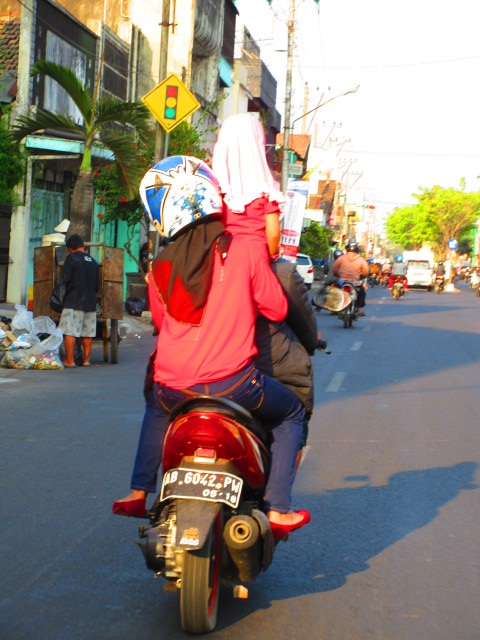 I found people in Indonesia to be very relaxed. Aside from circumstances where the role of tourist and commission-based service provider were well defined, most people went about their lives without taking much notice of us. I liked the relaxed vibe of Indonesia. Everything was pretty slow paced and quiet. Kuta, Bali was insane, but that’s because it’s a huge party town. I was especially surprised by some of the generosity that I’d seen in Indonesia. One evening on Gili Air, I was thinking all day that I really needed to go out and get a bottle of water. I hadn’t drank any all day, and was going to pick some up on the way to dinner. When I left our bungalow, I passed an older woman carrying a box full of water bottles. She stopped, looked at me, and said, “You take this one here. I give this to you”, pointing to a bottle. I was so grateful and surprised. Firstly, I was surprised at how my hydration guardian angel sent me this gift of water. Secondly, I was surprised that someone who knew that I could clearly afford a bottle of water whenever I’d like, was willing to give one to me just out of the kindness of her own heart. I felt so full and happy the rest of the night….not to mention hydrated.

Coming from Malaysia, where we were spoiled with delicious food, it was surprising how underwhelming the food options were in Indonesia. The main dish seen throughout was Nasi Goreng. This is basically fried rice with chicken and egg. While it is delicious, eating fried rice can get pretty boring after multiple days. The other delicious food that I never got sick of was fried tempe. This is made of soybeans and is just thick starchy goodness. There was also Gado-Gado, which is fried vegetables tossed with peanut sauce. I tried it a few times, but I just couldn’t get into the sauce. The weirdest thing I ate in Indonesia was fried banana with cheese. I was on board with the fried banana part, but the flavor of the cheese with the banana was quite odd. By the end of the trip, it was mainly flatbread pizzas and chicken sandwiches. 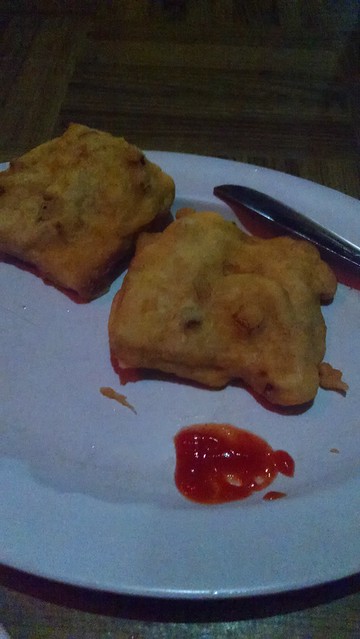 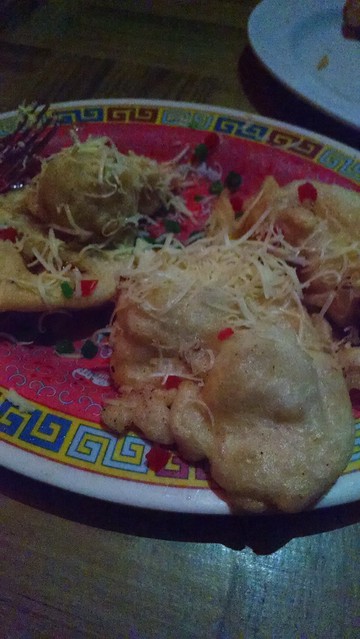 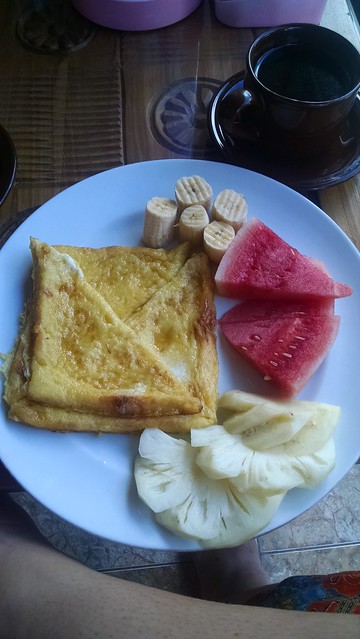 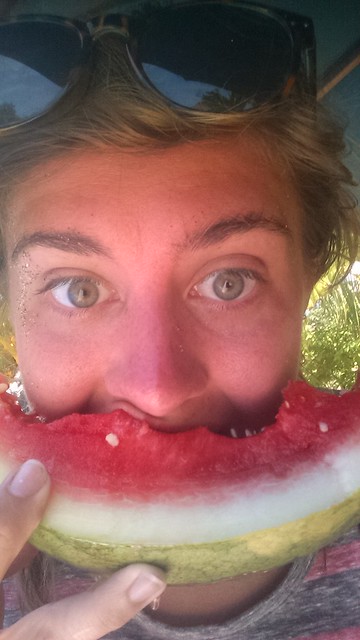 So Much Fresh Fruit 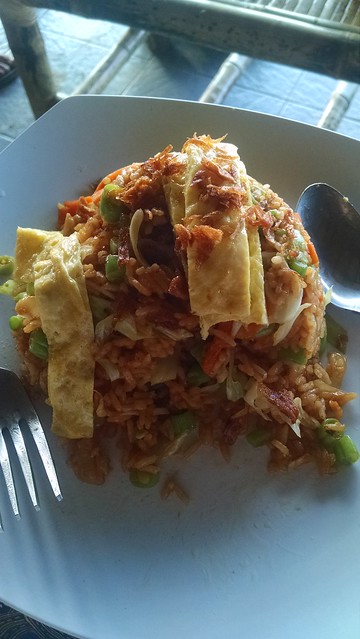 Chilling Out in Yogyakarta, Java

This place was the first time in our travels that we stayed more than 2 or 3 nights somewhere. We didn’t do an excessive amount of trekking or sight-seeing. It was a very welcome place to take a few days and do relatively nothing. I think since we only have 5 months to see 10 countries, we felt obligated to be constantly moving and onto the next place. I was feeling very burnt out by the time we reached Yogya and we had met a really cool girl that I spent time hanging out with. I picked up my casual travel outfit there and mostly just recharged. The town felt very much like a cultural epicenter. The shopping was great and cafes were everywhere. It was a really nice, quiet place to spend a few days. 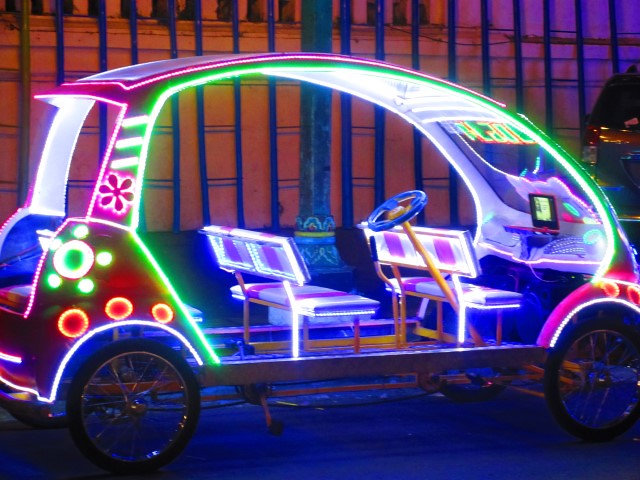 Saw a Bunch of These Parading Around in a Circle 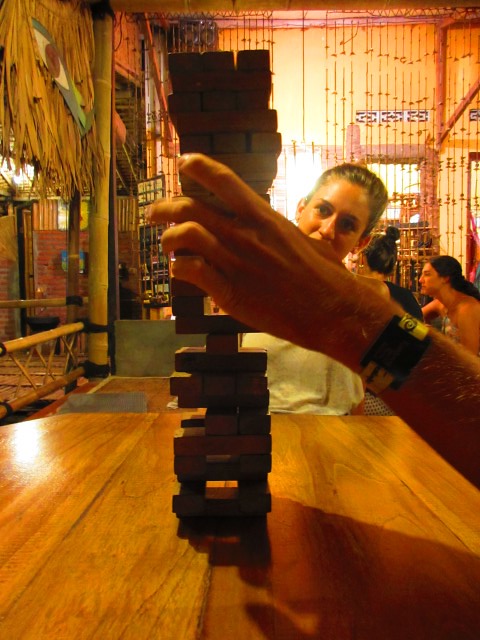 Relaxing and Playing some Jenga

When I read about Ubud, it was advertised as this cultural haven. It is supposed to be where women go to find their Eat, Pray, Love. I hadn’t seen the movie or read the book, but I could imagine what they were talking about. The streets were lined with beautiful cafes, yoga studios, craft shops, and swanky restaurants. Outside of town there were walking paths that take you through beautiful rice paddies and tea farms. Nightly traditional dance performances could be found all over the city. While in Ubud, I didn’t feel like my womanly destiny was pulling me there. I had some nice fancy coffee and saw some beautiful things, but it was more a relief from all the sun I’d been getting on the beaches. It really was a very special place, and I could see why many women and men feel very connected there. My Eat, Pray, Love wouldn’t happen until later on in my journey. 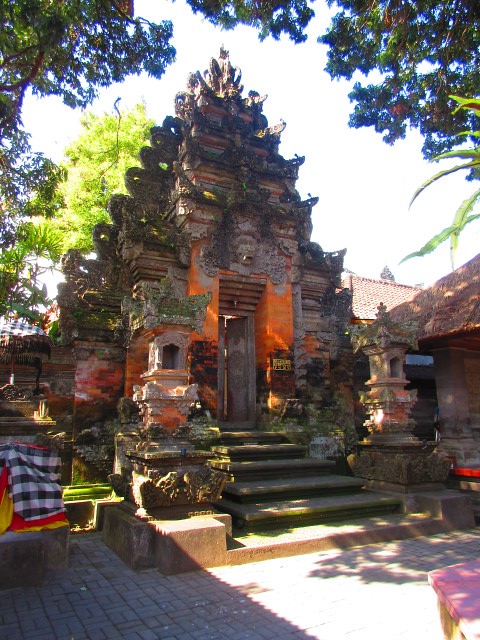 One of Many Beautiful Temples in Ubud 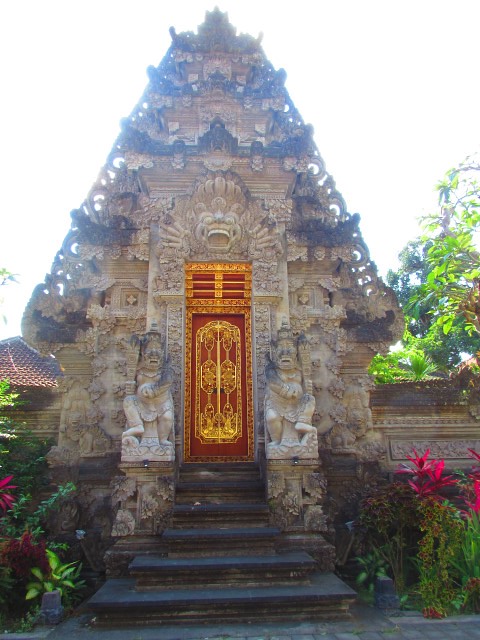 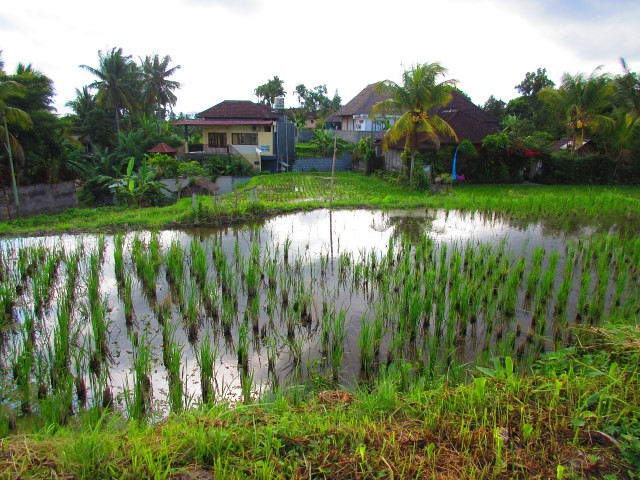 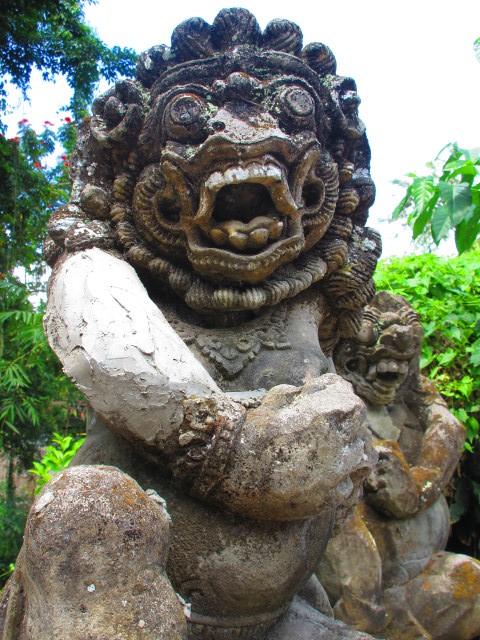 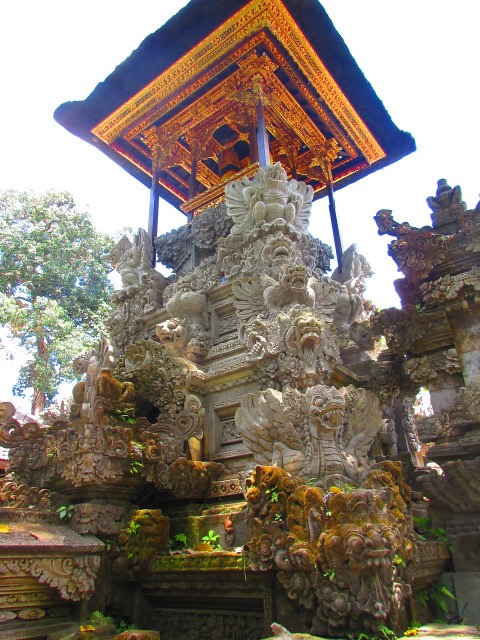 Another Massive and Intricate Temple 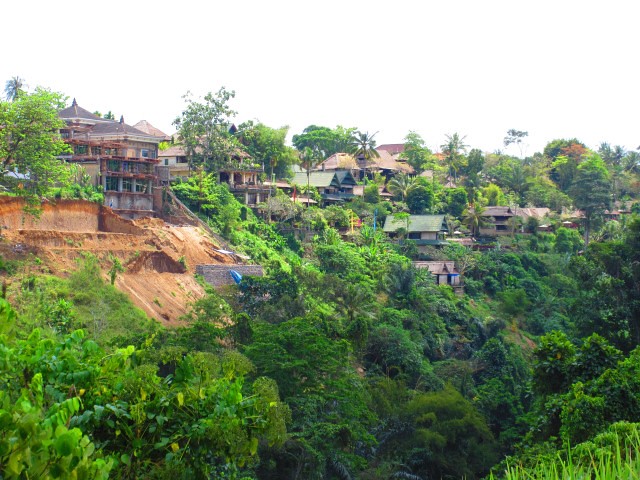 Homes Built into the Hillside 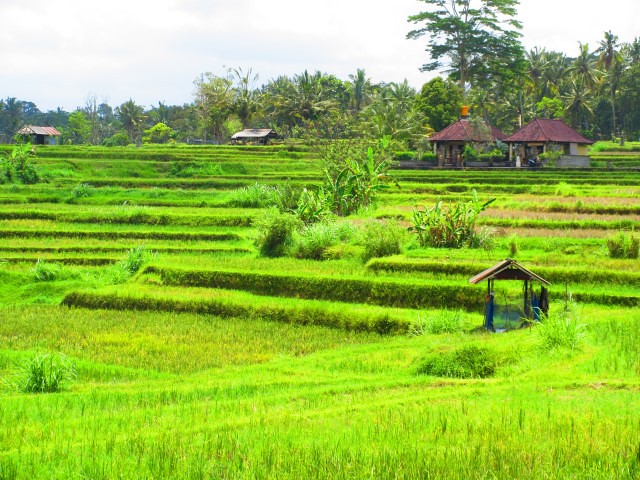 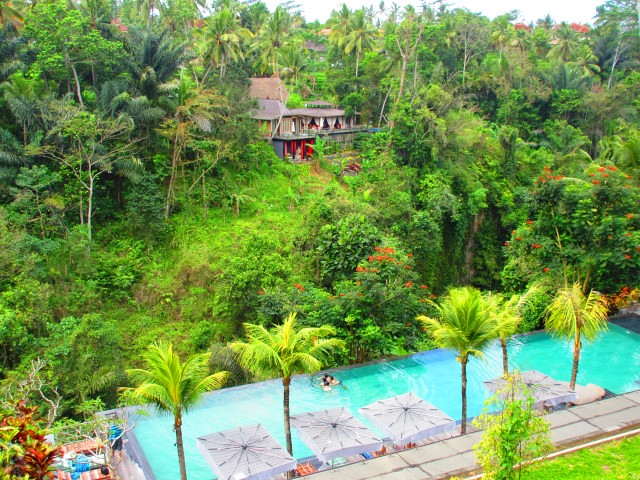 Wishing I had Booked this Hotel 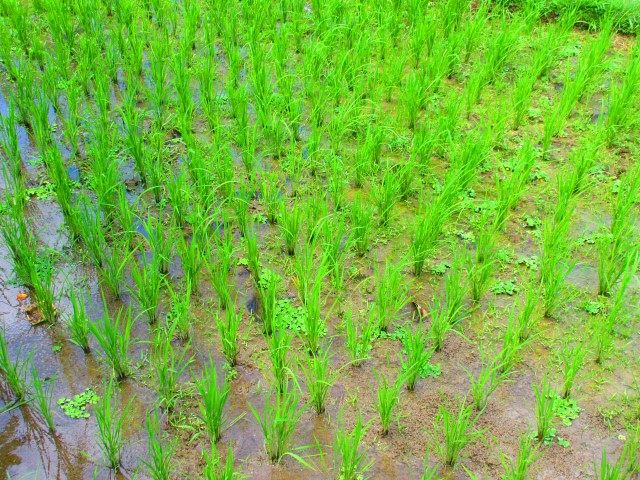 Close Up of a Rice Paddy 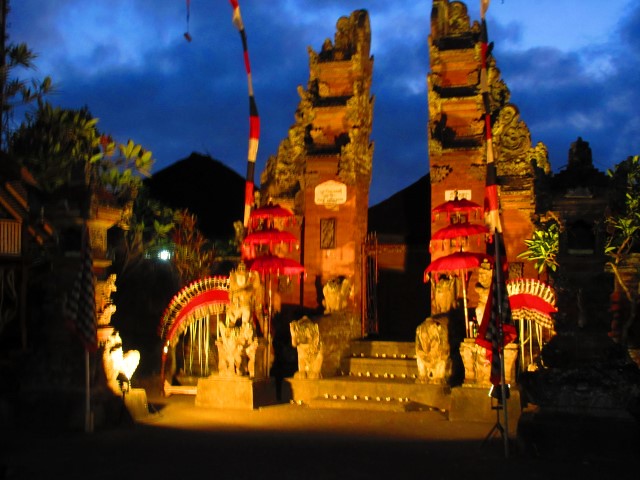 Traditional Dance and Song Show About to Start 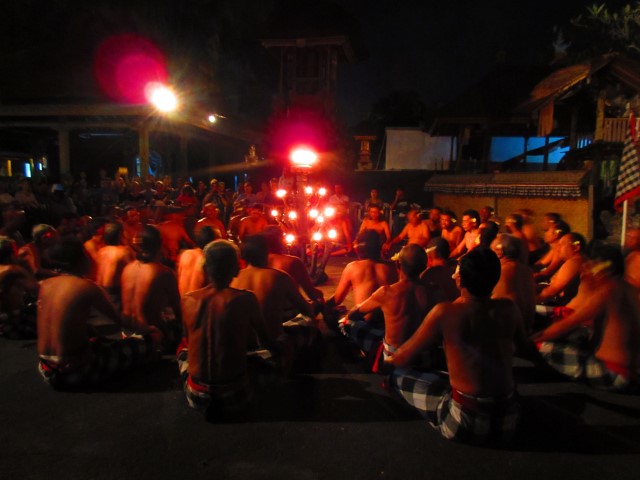 Narrators (All the Music is Done With Voices) 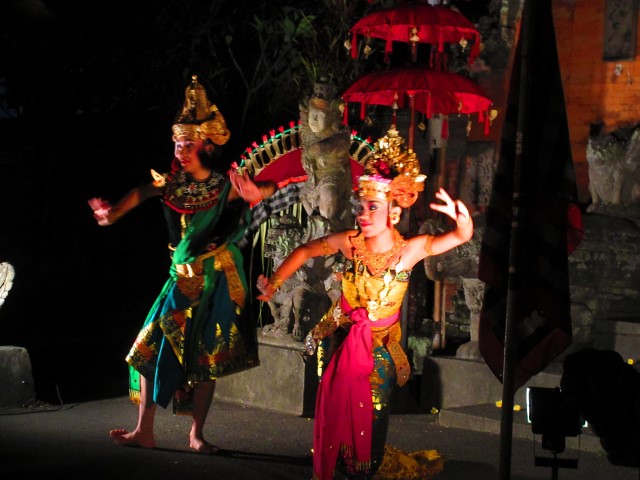 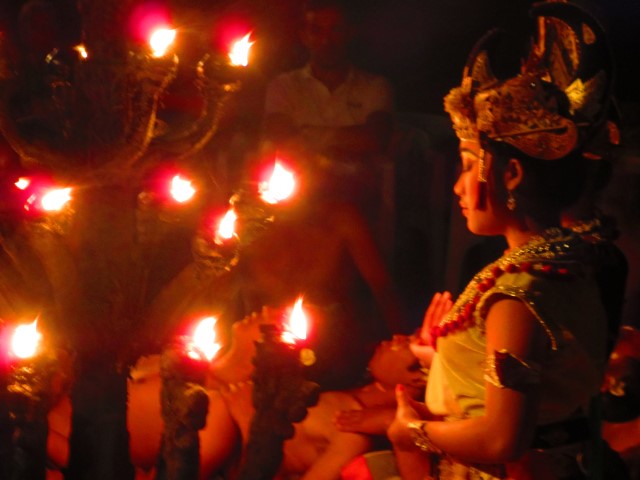 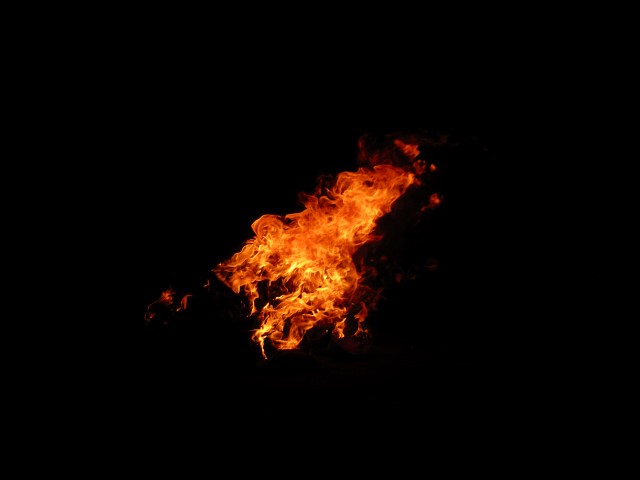 One of the Actors was a Fire Walker

Indonesia is such a unique and wonderful country. There’s so much to experience. My favorite thing about the country was the multitude of different ways to enjoy yourself. One day I’d be on a beach relaxing, the next I’d be hiking up to a volcano, the next I’d be jumping off of a waterfall. Some of the most enjoyable days were spent in Indonesia. I imagine I’ll return in the future.